Andrea came to my clinic looking for a natural therapy to treat her anxiety. She’d been plagued with symptoms — irritability, agitation, stress, insomnia and panic attacks — for months.

Andrea isn’t alone in how she’s feeling. It turns out the country is in the middle of an anxiety epidemic.

In fact, a brand-new survey found that Americans’ anxiety levels have increased dramatically in the last year — with 40% of people saying they feel more stressed today than they did a year ago.1

And that increase follows on the heels of a 36% spike from the year before.2

Now, Andrea knew she needed help getting her anxiety under control. But one thing she was adamant about was not taking Big Pharma’s prescription drugs.

I get it. These anti-anxiety pills are marketed as safe and effective. But they’re not… They cause negative side effects that range from mild to downright dangerous. Some of these effects include:

And in some cases, it’s even worse…

In one study, researchers followed almost 35,000 people who filled prescriptions for these pills for three years. After excluding factors like smoking, age and alcohol, researchers were left with a horrifying fact:

People who took these drugs had more than double the risk of death than those who didn’t.3

And for many people, the risk is even higher. Those who took 90 doses or more during the first year — that’s the equivalent of only three months of any prescription — had their risk of unnatural death skyrocket by 451%.

That’s why I always suggest natural remedies that have been proven safe and effective for hundreds of years. I’ve recently started recommending a natural oil that dates back more than 6,000 years.

It comes from the Cannabis sativa plant — or CBD.

And until the early 20th century, it was widely used in American medical practice.

In fact, it made up half of all medicines prescribed and sold.

But then the federal government got involved and for political reasons they declared this life-saving herb illegal. But here’s what the politicians got wrong from the get-go…

CBD has virtually no THC. That’s the psychoactive compound in marijuana that can alter your state of mind.

Luckily, the government recently reversed course and passed a bipartisan Farm Bill a few months ago. For the first time in 80 years, hemp products are once again legal in every state.

For Andrea and patients like her who don’t want to take Big Pharma’s pills, that’s a relief… Because this age-old oil has been shown to relieve anxiety and stress.

In one study, researchers asked 24 people who suffered from Social Anxiety Disorder (SAD) to speak in front of a large audience. At different times during the speech, they measured participants’ blood pressure, heart rate and skin conductance. Then they compared the anxiety levels of those who took CBD to those who received a placebo or nothing at all.4

They found that those who “took the hemp reported significantly less anxiety.”

Today the oil is being studied as a treatment for post-traumatic stress disorder, or PTSD. That’s a severe form of anxiety triggered by a terrifying event. It’s often associated with veterans returning home from war.

In a recent study published in Frontiers in Pharmacology, researchers gave CBD to rats that had been exposed to traumatic conditions. But after consuming the CBD, they exhibited a lower level of fear.5

Although research is still in the early stages, scientists think they’ve figured out how CBD works to relieve stress — by targeting and boosting the signal of 5-HT1A serotonin receptors on brain cells. Serotonin helps regulate mood and is associated with feelings of well-being.

I love to start my day with hot buttered coffee. But it makes sense to end a stressful day with CBD-infused decaf coffee. Here’s one of my favorite recipes: 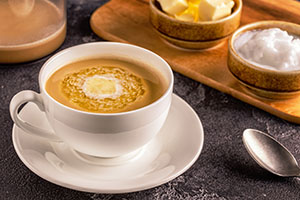