If your house is anything like mine after the holidays, you probably have lots of leftover sweets and candies.

This is also the time of year when you see lots of articles hyping chocolate’s health benefits.

I saw one recently that said eating 3.5 ounces of chocolate a day — that’s a large Dove bar, two bags of M&M’s or 22 Hershey’s Kisses — is linked with a lower risk of heart disease and stroke.1

But here’s what they’re not telling you…

Those studies were paid for by the chocolate industry. In fact Mars, the company that makes Dove and M&M’s, paid for 100 separate studies on chocolate’s health benefits.

Not surprisingly, 98 of those studies showed a positive result. It reminds me of the old saying, “if it seems too good to be true, it probably is.”

And unfortunately, those commercial chocolate candies you find on your supermarket shelves — with their added sugar, fat and calories — aren’t a healthy choice.

However, there is an ingredient in dark chocolate that I consider to be a superfood.

The nutrients in cocoa — the bean that dark chocolate is made from — are high in antioxidants called flavonoids. Flavonoids are the natural antioxidants in fruits, vegetables, tea and wine.

In fact, cocoa contains up to four times the flavonoids found in tea.2 These flavonoids can reduce your risk of a host of serious illnesses, including:

And now you can add another benefit to the list.

The cocoa in dark chocolate reduces your risk of diabetes. Let me explain…

A large study of more than 900 people found that those who eat dark chocolate at least once a week had a lower prevalence of diabetes and were at lower risk for diabetes four to five years later.4

A separate study published in the Journal of the American College of Cardiology found that cocoa significantly improves blood flow in people suffering from type 2 diabetes.5

Poor blood circulation is one of the most serious health hazards a diabetic faces. If left untreated, circulation can get so bad that it can lead to amputations — and even a heart attack.

In the study, researchers divided diabetics into two groups. The first ate about 1,000 mg of cocoa three times a day for four weeks. A second group consumed about 25 mg.

Cocoa’s power to improve blood flow lies in its ability to kick production of nitric oxide (NO) into high gear.

NO causes the linings of your blood vessels to relax and open up, improving circulation, lowering blood pressue, and helping your body to deliver oxygen and other nutrients in the blood more efficiently.

When you’re looking for a good source of chocolate, here are a few tips to keep in mind:

My favorite way to enjoy chocolate is the same way the early natives of the Americas did. The Aztecs in Mexico, the Mayans in Guatemala and the Incas in Peru all cultivated cocoa.

They fermented and roasted the beans to make a powerful chocolate drink. They called it the “Drink of the Gods,” because of its many health benefits. It was served as a bitter, frothy liquid, and often mixed with spices and wine. It was also recommended as an aphrodisiac and strength-giver. 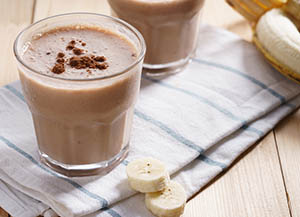 A chocolate smoothie is a great way to
start — or end — the day.

Make the Drink of the Gods This Season

Blend until smooth and enjoy!

Renew SCII is the first of its kind with its unique capacity to stimulate and protect human stem cells, support healthy collagen levels and erase years from your face.

FIND OUT MORE...
Marilyn’s Bombshell Skincare Secret
What are the Health Benefits of Wine and Chocolate?