A recent study confirms what I’ve seen firsthand in my own clinic.

The powerful antioxidant curcumin is also a proven mood-booster.

One of the women on my staff, C.R., came into my office one morning to talk to me about her 15-year-old son. He’d been irritable and moody and sleeping a lot lately. Most mornings, he’d miss the bus to school and then stress about being late.

But on that day, he was up on time with his backpack packed and a smile on his face. C.R. even heard him whistling in the shower! And he was at the bus stop 10 minutes early.

As a matter of fact, I told her, there is… and a recent study in the American Journal of Geriatric Psychiatry offers further evidence of curcumin’s mood-enhancing effects.

Researchers from a prestigious California university gave curcumin to 40 adults, all of whom had mild memory problems.

Curcumin is an active compound of the turmeric plant. There are thousands of published studies about how powerful it is for treating hundreds of conditions.

And a number of those show that curcumin is an effective treatment for mood disorders ranging from depression to anxiety to mood swings.

In one study, patients with major depressive disorder were divided into three groups. One group took 20 mg of Prozac every morning. Another group took 500 mg of absorption-enhanced curcumin twice a day. And the third group took both. The curcumin group responded just as well as the Prozac group. But with no side effects.2

In another study, mice were restrained for six hours to induce stress. They were then given 20 mg of curcumin. It produced a significant antianxiety effect.3

And in another study from a prestigious California university, adults aged 60-85 were given 400 mg of curcumin for 30 days.4 Results showed improved cognitive function and a general sense of well-being, state of calmness and contentedness.

So why don’t most people know about curcumin’s mood-enhancing abilities?

Let’s put it this way…

There are hundreds of mental health drugs on the market — antidepressants, antipsychotics, antianxiety meds, mood stabilizers…

The most profitable one is Abilify, which is prescribed as an “add-on” treatment for depression. It costs a whopping $30 a pill. It makes $7 BILLION in profits every year.5

And as I mentioned, that’s just ONE of the many mental health drugs on the market.

By comparison, you can get the healing power of curcumin (in a supplement) for about $1 a day.

You can buy a pound of fresh turmeric root at a specialty market for about $10.

No matter how much evidence keeps rolling in about curcumin’s healing powers, it will never be a money-maker for Big Pharma. So it’s easier to just ignore it.

Improve Your Mood with Turmeric

Curcumin is one of nature’s greatest miracles. And the easiest way to make sure you’re getting its benefits is with a supplement. But make sure you choose one with at least 90% curcuminoids. Also, look for one that contains piperine, a black pepper extract that boosts absorption. Take 500 mg to 1,000 mg each day.

I also like to cook with fresh turmeric root. I use it in everything from scrambled eggs to soups and stews. I’m always trying out new recipes.

I really love drinking smoothies in the morning, and have been experimenting with ways to incorporate turmeric into them. I tried this recipe last week… and I think it’s a winner!

I hope you think so, too… 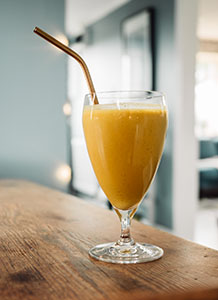 A glass of a turmeric smoothie is a great way to start your day. It not only tastes delicious, but it has the potential to help improve your mood and overall well-being.

Rejuvenate your cells overnight and reduce the appearance of lines, wrinkles and age spots with the new & improved DNA supporting power of this all natural night cream.

FIND OUT MORE...
Stem Cells Beat Stroke
Word’s Getting Out About Fat